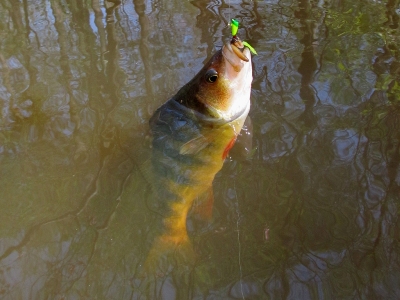 The main stem of the Delaware River is the longest undammed river east of the Mississippi, providing an unobstructed path for migratory fish extending over 300 miles. The river is a boundary water shared by Pennsylvania and New Jersey. In general, the two state's borders follow the river's centerline. As the Delaware River becomes tidal, it forms the border along northeastern Delaware. While fishing on the Delaware, anglers are required to comply with the regulations of the state in which they are located, regardless of their residency or point of boat launching.

The river provides refuge for a wide range of fish and wildlife. In its upper reaches anglers fish for wild trout, carp, smallmouth bass, rock bass, sunfish, walleye, and other species of freshwater fish. In spring, the Upper Delaware is noted for its American shad, hickory shad, and river herring spawning runs. A stretch of the river from the confluence of the East and West branches downstream to Milrift, Pennsylvania has been designated as a National Wild and Scenic River.

A number of Delaware River tributaries are suitable for fishing and exploring. Because of their small size and shallow depths, many of these warm water streams and creeks are only accessible on foot or by kayak, paddleboat, or other small craft.

The tidal portion of the river extends from the fall line near Trenton, NJ to river's convergence with the Delaware Bay. The tidal Delaware demands respect from anglers, paddlers, and other boaters. Its powerful tidal surges, combined with large vessel traffic can make for treacherous conditions.

Despite its hazards, the tidal portion of the river offers fishing opportunities for striped bass, white perch, yellow perch, largemouth bass, channel catfish, carp, and other species. During late winter thru early spring, the Delaware is one of the best rivers in the Mid Atlantic for yellow perch fishing. As the river nears the Delaware Bay, anglers find an increasing variety of saltwater species.

The tidal Delaware River and Delaware Bay is included in the National Estuary Program.