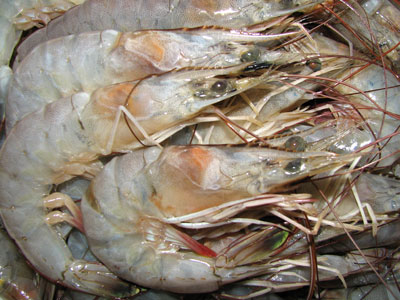 In some areas, warmwater shrimp are harvested recreationally with cast nets, dip nets, or other gear. Brown shrimp and white shrimp make up the majority of catches.

Shrimpers harvest from shorelines, docks, or from boats. A variety of specialized techniques are used by shrimpers to locate, attract, and capture shrimp.

The most common method for catching shrimp is cast netting. In coastal estuaries and creeks, shrimpers target productive areas which usually consist of shallow areas with sandy or muddy bottoms.

In some areas, cast netters increase their catch by setting out chum. One of the most popular techniques involves the use of pre-mixed chum cakes. Chum is formed into a ball or cake shape and placed into a small net bag. The chum is usually attached to a pole or buoy. After deploying, shrimpers move slowly and cast around each marker, often working a series of chum placements.

Along shallow shorelines and beaches, haul seines are sometimes used to harvest shrimp. Seines require two harvesters, each walking along slowly while guiding the seine along the bottom.

In some areas, recreational shrimping is subject to regulations which may restrict gear, seasons, fishing times, creel limits, and other factors.