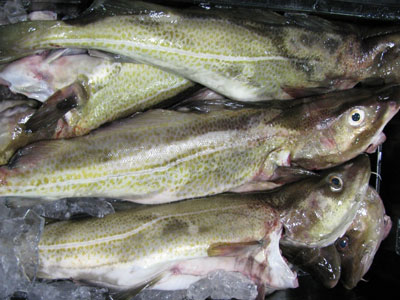 Atlantic cod vary greatly in size from a few pounds up to monster fish of 80 pounds or more. Larger cod are usually caught well offshore.

In the Mid Atlantic region, New Jersey and New York are leading states with some of the best fishing occurring out of Montauk.

Although rare in the southern half of Mid Atlantic, anglers sometimes encounter cod during winter wreck fishing trips.

The most popular baits for cod fishing include sea clams, squid, and crab. Cod are also caught with diamond jigs or other shiny lures.

Cod are sometimes caught together with Atlantic Haddock and Atlantic Pollock.