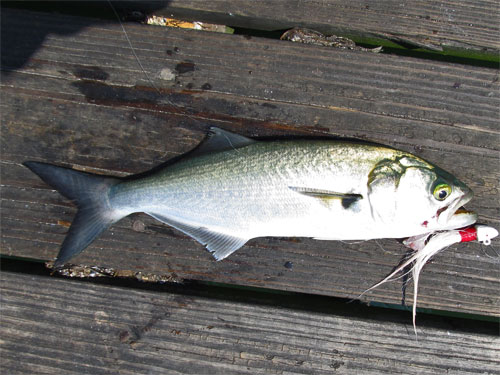 Bluefish are a common catch along the Mid Atlantic coast and its estuaries. Bluefish fish usually arrive inshore in early spring, showing up in the surf, inlets, and inshore bays.

Schools of bluefish are often indicated by the presence of birds diving. Below the schools of hungry bluefish may be striped bass, weakfish, or other species.

By late May or early June, Bluefish may appear off the Mid Atlantic coast in large numbers. From a few miles from the beach, out to the 20 fathom line and sometimes beyond, large schools will take up residence on lumps, hills, and shoals.

Bluefish are shadowed by mako sharks in the late spring and are often used as bait by anglers targeting sharks.

As tuna arrive, bluefish may become pests as they occupy the prime tuna haunts, eagerly destroying anglers lures and tackle. By mid-summer, most of the larger bluefish tend to migrate north and tuna fishing is not disrupted.

In general, bluefish are not hard to catch. They readily attack metal jigs and lures which match the prey they are after. They also take almost any cut or live bait. In most areas, spot or mullet are favorite baits.

Bluefish have dark meat and their table quality is a matter of opinion. The flesh is soft but easy to fillet, and the fish yield a good amount of meat. Many anglers skin the fillets, which helps to remove some of the strong, dark meat. Large bluefish is excellent smoked due to its high oil content.