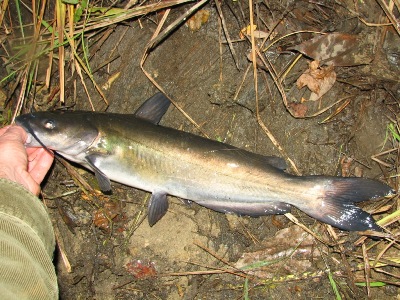 The channel catfish is the most familiar American catfish. Channel cats are found throughout the entire Mid Atlantic region in lakes, rivers, and creeks.

Tolerant of brackish water, channel catfish are common in the Chesapeake Bay, Delaware Bay, Pamlico-Albemarle Sounds, and other estuaries.

Fishing for channel catfish varies slightly among regions, but most anglers catch them using the same basic techniques. The most common method for catching channel catfish is with live or cut baits, fished on or near the bottom.

Popular baits for catching channel cats include shrimp, crab, clam, bloodworms, nightcrawlers, live minnows, cut fish, chicken livers, and other baits. Like other catfish species, they can be caught during the day, but fishing often improves after dark.

Occasionally, anglers fishing for largemouth bass or other species are surprised to catch channel catfish. They readily take plastic worms and other soft baits that are fished near the bottom.

Channel catfish yield lean, boneless fillets. The flesh is firm and usually has excellent flavor although some fish seem to develop a less appealing taste during the summer season.