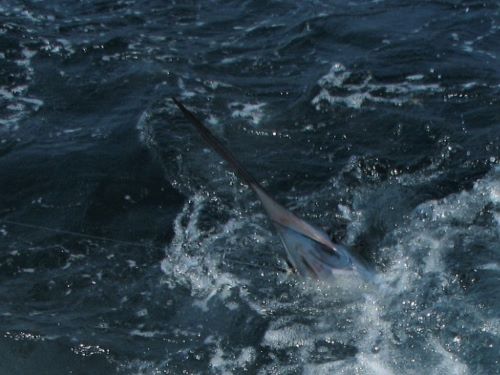 The white marlin is one of the most exciting billfish. Once common in nearshore waters, the species is usually encountered in or near deepwater canyons of the Mid Atlantic.

White marlin are most often caught by trolling, although other techniques can be effective. Trollers use a variety of natural baits, artificial lures, or combinations of the two to catch these colorful fish.

A hungry or agitated marlin will dramatically change color, known as “lighting up”. Marlin attack by charging the bait and and batting its bill at the offering. Whites may concentrate on one particular bait or move between various lures in the spread.

White marlin are protected from commercial harvest and practically all recreational fishermen choose to release all white marlin. Recent advances in marlin fishing have included the use of circle hooks, which help reduce injury to fish.

In the Mid Atlantic region, offshore fishing tournaments generally promote catch and release fishing practices for white marlin. Although some tournaments still weigh fish, most fish are released and there is pressure on tournament organizers to modify rules to require the release of all fish.