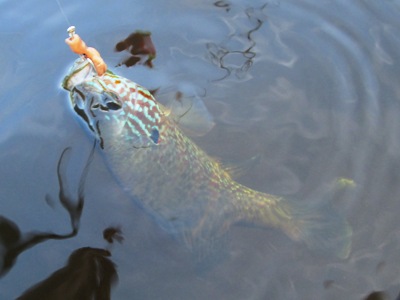 Trolling, although normally associated with conventional boats, can be productive when done from a kayak.

Time of day is often a factor when trolling. Most fish are more active during certain times of the day and fish often move in response to time of day. Trollers often capitalize on this behavior by fishing in areas where fish congregate. Trollers may also target specific pathways that fish travel in response to daily triggers.

Wind usually has a big impact on kayak fishing and fishing in general. Although too much wind makes kayaking unsafe, moderate winds may actually improve trolling or other kayak fishing techniques. Wind is often associated with a change in barometric pressure, which in turn affects fishing. Winds also help to clear debris from the surface, improving access to fish.

Propulsion is important for most kayak fishing. Depending on the situation kayak trollers may choose to paddle, use pedal power or equip kayaks with electric propeller drives. Wind and current also affect fishing kayaks and trolled lines.

In many situations, such as when obstructions are present, trolling depth is of utmost importance. The depth at which lures run while underway can vary greatly depending on water depth, current, vessel speed, distance from the boat, line type, and other factors.

In some situations, lure depth can be hard to predict and control, especially when fishing deep water when a vessel travels at higher speeds. Fortunately these situations are uncommon when trolling from kayaks.

A typical application of freshwater kayak trolling occurs when anglers suspect that panfish such as sunfish, crappie, perch, or other species are suspended at mid depth in relatively shallow ponds, lakes or river channels.

In these cases, anglers simply tow one or more lines, rigged with small jigs. Since lures are prone to getting fouled or hung when they contact the bottom, the forgiving behavior of jigs makes them popular choices for fishing in areas where depth or maneuverability is limited.

Small jigs sink fairly slowly and rise towards the surface as their speed is increased. This attribute works well with kayak fishing, as anglers are typically multi-tasking and unable to maintain constant speed or direction. To visualize what occurs when lures are trolled behind a kayak, a good starting point might be to study the behavior of a basic setup, and then compare those results to more complex situations.

For example, most manually paddled fishing kayaks move at speeds from .5 to 6 mph., depending on the situation. If an angler trolls a single 1/16th oz. jig approximately 25-50′ behind the craft, it will sink and maintain a depth of several feet at low speed, rising as speed is increased until eventually skimming along the surface at higher speeds.

By experimenting with speed, lure depth can be varied. Lure speed is critical in some situations as it can affect the tendency of fish to strike the lure. In addition to speed, the amount of line payed out behind the boat can affect depth although, the relationship is not linear. Aside from speed and distance, lure weight has a significant effect on its trolling characteristics.

The shape of a lure can also have a considerable impact on its performance. Choosing lure shape can be challenging as some lures perform well only at certain speeds. Lure designs that have a narrow range of effective speeds can clash with some kayak fishing situations.

When fishing multiple lines, anglers must choose setups which compliment each other in order to avoid tangles. With few exceptions, kayakers are faced with several challenges when kayaking.

Typically, kayakers must vary speed, stop, turn, and make other maneuvers which cause lines to change depth. If trolled lures are mismatched the results can be frustrating, expensive, and in some cases even dangerous.

When a kayak begins a 360 degree turn, trolled lures may behave in a variety of ways, depending on the kayak speed and distance between the lure and the boat. If 2 lines are spread apart and towed in a slow circle, the inside lure slows down and begins sinking while the outside lure tends to increase speed and may rise in the water column. If the turning angle is increased, lines can go slack, cross and both lures may begin descending.

Deep trolling, like other forms of fishing, presents considerable challenges to kayakers. Although conventional boaters have a variety of specialized equipment available for reaching deep areas, most deep trolling equipment is not suitable for kayak fishing.

In spite of limitations, kayak fishermen are often successful at catching fish in deep areas. In some fisheries, such as Great Lakes salmon, lake trout and steelhead fishing, anglers are able to catch deep dwelling species successfully by trolling lures with inline weights or small planer type attachments.

Another example occurs when anglers fish for striped bass in freshwater lakes or tidal estuaries. These heavy bodied fish lurk along channels, around structure and in areas where baitfish schools are found. Kayak anglers often employ deep running plugs which dive on their own at trolling speeds, then float to the surface when the kayak stops.

With local fishing conditions varying widely, each kayak angler must develop their own trolling strategy. In areas where trolling techniques are effective, anglers often choose to add specialized rod holders, electronics, and other fishing equipment.

These are a few tips and techniques for trolling by kayak: