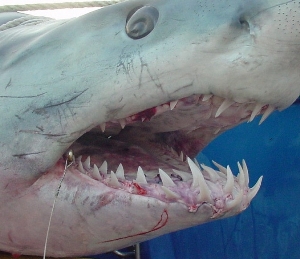 The techniques mentioned here pertain to fishing for sharks although many of the same practices apply to fishing for other species. Throughout the Mid Atlantic region, anglers use chum to attract sharks, bluefish, cobia, dolphinfish, and other species of saltwater fish.

When sharking, a top priority is obtaining fresh bait. This is of utmost importance. Occasionally, anglers can obtain fresh bluefish, trout, spot, or croakers from the previous day’s fishing trip. Another option is to find a local tackle shop or seafood market that sells fresh fish for use as bait.

Often, sharkers must find bait on the day of the trip. Inshore wrecks, reefs, or shoals may hold small bluefish or other inshore fish. Another method is to troll around the inshore hills or other hotspots for bluefish, false albacore, or bonita.

Once the bait is obtained, anglers must travel to the area of choice. This can include spots near the 20 fathom line or other locations out as far as the canyon edges. In many areas, the best fishing occurs from 20 to 30 fathoms, particularly in June.

Anglers usually drift when chumming for sharks in order to cover as much water as possible. When a drift is begun, a bucket of frozen chum is deployed by inverting the chum into a large mesh clam bag or other container. The bag is tied off to a cleat or outrigger with enough rope to stay in the water without being pulled out as the boat rolls. The chum bag should not be allowed to drift into the boat prop or other gear.

Some anglers enhance their slick with menhaden oil which is dispensed from an I.V. bag-type dispenser. The dispenser has a valve which should be adjusted until the flow of oil is limited to a drop or two every few seconds. The oil and dispenser are usually available from coastal tackle shops.

Once the chum and oil are flowing, the rigs are baited and set out. Anglers use pre-made leaders or assemble their own. One of the more popular custom leader types consists of about 15 feet of heavy multi-strand cable, a large swivel, about 24 inches of #15 single strand wire and 16/0 circle hook.

Shark leaders can be baited with whole small fish or fillets. The sharks do not seem to be shy of hooks or the leader at all and any attempt to hide the hook is often counter productive. Unlike rigs that use conventional hooks, circle hooks seen to work best if they are run thru the top edge of the fillet with very little meat blocking the gap of the hook.

Several shark rigs can usually be put out with some combination of weight, float, and distance from the stern in order to keep the rigs separated. Any attempt to set a bait shallower than 30 feet is usually detected and destroyed by the sharker’s nemesis, the shearwater. This clever thief is a gull sized brown bird that lives offshore.

Once a slick is setup, shearwaters will appear and begin their task. They will locate a balloon in the slick, land, and stick their e head down to look for a bait. If they spot the baited shark rig, the birds “fly” underwater and neatly snip every scrap of meat from the rig, leaving only skin on the hook. Despite being a nuisance, shearwaters often signal the arrival of a large mako or other shark by suddenly erupting out of the water.

A shark bite is signaled by the clicking of a reel or sometimes only by the movement of the balloon. If a circle hook is employed, the rod should be lowered and line reeled in until pressure is felt. Next the drag is tightened and line reeled in more if needed until the pressure on the line is significant. Usually at that point, mako sharks will take off and hookset is not a factor. Other species may or may not run when hooked.

Once the fish is on, there is a lot to be done to make ready for the catch. Every effort should be done to identify the fish and estimate the size. Remember that in federal waters, special size limits and regulations may apply and a NMFS permit is required to kill a shark (at the time of this writing). Anglers are advised to check fishing regulations as they change on a regular basis.

Lines should be cleared and the chum bag stowed. Clutter in the cockpit should be kept to a minimum. One or more leadermen should put on gloves and be ready. If the fish is to be released, a pair of cutters should be readied to cut the leader. When the leader appears, the leaderman must grab it and control the fish. This is a difficult maneuver and the danger should never be underestimated. A mistake at this point could mean the loss of a fish but more importantly injury or worse for the crew.

If the shark is to be released, the wire is cut between the hook and cable. Otherwise, anglers deploy a harpoon to control and kill the shark. The dart of the harpoon is connected to a rope which gets cleated on the stern or to a buoy. Firearms are sometimes used but only as a last resort as this only adds to the danger. Common sense and making safety a priority will lessen the risk.

When fishing for large sharks, its advisable to develop a plan where each man has a task and everyone considers how to react if something goes wrong. The leader, harpoon shaft, harpoon tip, harpoon rope, and the shark itself are all dangers that can be entangled or flung suddenly at the crewmen.