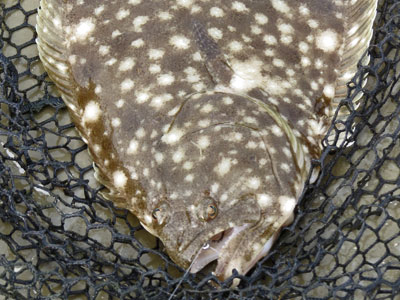 Flounder fishing is popular in Virginia. Towns like Chincoteague, Wachapreague, and Quinby are well known for their access to flounder hotspots.

Some anglers specialize in catching this fish almost exclusively while other choose to target them only at certain times. While no single location, technique, or angler is a guarantee of success, there are a few tricks to the fishery.

The action typically begins around Machipongo, Quinby, and Wachapreague and within days spreads north to Chincoteague and eventually into Maryland and Delaware.

A few fish may arrive in March but the majority of spring flounder catches usually occur in April and continue into May.

The early spring action involves several key factors that can make or break the anglers success. Water temperature seems to play a critical role in influencing the fish to become active. A popular rule of thumb is to look for water temps around 55 degrees. This is only a guide and many fish have been caught in colder water. Water temperature is very complicated and surface temperature is not always an indicator of the situation at other depths. Tide is also a big factor and the tide-water temperature relationship is a key factor.

Good spring time fishing often occurs when the tide will be high in the mid morning thru afternoon hours. The theory is that the cold ocean water comes in and flows up onto the flats were the sun can warm it a significant amount in just a few hours. At times, the flounder stack up in key areas and when the tide changes, the warm water flows into the channel edges, triggering the flounder to suddenly become aggressive feeders. This phenomenon doesn’t occur everyday but when conditions are right, the fishing can be excellent.

A discussion of spring flounder fishing would not be complete without mentioning the obstacles to success. First on the list is the dreaded northeast wind. This curse stirs up the bottom, makes fishing uncomfortable and seems to discourage flounder to bite. The only defense is to try as best to use the wind to advantage, perhaps by finding an area where wind and tide will cancel each other in order to obtain a decent rate of drift.

The second bane anglers encounter is the sudden bloom of a brown algae known locally as “cow slime”. Cow slime consists of long thin strands of disgusting ooze which covers bait, leader, line, boat, and angler. The infestation can vary from slight to unfishable.

A bonus plague is the green “lettuce” or “salad” which can accompany the cow slime. The lettuce has considerable weight, so at least you get to fight something. The best defense against algae attacks is to fish the top of the incoming tide and hope a bite develops before the mess gets unbearable.

The third hindrance is less of a problem and to many anglers, a welcome event. Bluefish, from 1 to 10 pounds will sometimes invade the inshore channels. At times, any rig dropped for flounder will be quickly attacked. Despite disrupting flounder fishing, spring runs of bluefish are generally a welcome occurrence.

A few tricks for the spring fishery have been developed by flounder specialists over the years. Successful anglers often prefer big minnows or big silversides for bait.

Flounder rigs with a hair or vinyl skirt on the top hook are also popular. One technique is to free spool a conventional reel with the angler’s thumb on the line. When a bite is felt, the angler slowly feeds line out, then puts the reel in gear and sets the hook.

A bonus in the fishery is the unpredictable appearance of other species in the mix. Along with the greedy bluefish, gray trout, kingfish, striped bass, and even black and red drum sometimes appear in the same area. A catch of any of these fish is often a signal to quickly retrace the drift pattern as these fish move in schools.

As spring gives way to summer, the fishery changes somewhat. The flounder migration settles down and anglers either turn attention to other quarry or, in certain cases, anglers crack the mystery of the fish’s habits and continue to find fish. These experts are 1 in a 100 anglers but the chosen few bring in prize fish day after day. Most are secretive about details but hard work and relentless dedication to the sport are usually key factors in their success.

By mid summer, anglers begin fishing the many wrecks, shoals and artificial reefs along the Atlantic coast. Anglers in search of flounder drift strip baits with sporadic success. Some days they catch flounder and some days they don’t. If a fish is caught, anglers often repeat drifts in the area in hopes of locating others. The fish vary but can be quite large in the inshore areas. By this time, flounder are also common in the surf and anglers experience catches of other species as a bonus.

As late summer nears, the inlet areas and near shore shoals sometimes get another surge of flounder. The shoal fishing just gets going by Labor Day and peaks around Halloween if weather allows boaters access. The luckiest of surf, shoal, and channel fishermen can also encounter trout, striped bass (rockfish), bluefish, and drum during this productive period.

While some fish remain, the unpredictable weather of November forces most anglers to end the season or switch to hunting.

How To Clean and Fillet Flounder