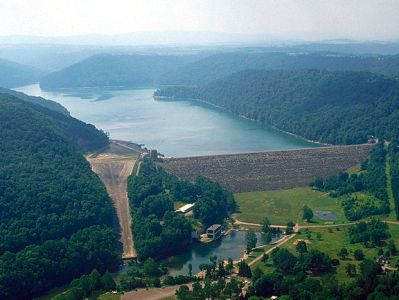 The Youghiogheny River Reservoir spans the Mason-Dixon Line between Pennsylvania and Maryland. The reservoir begins near Friendsville Maryland and extends to the dam in Confluence, Pennsylvania. The reservoir is approximately16 miles in length, covering 2800 acres. The maximum is depth 121 feet with an average depth of 54 feet.

The reservoir’s geographical features include rocky shorelines, sunken trees and stumps, boat docks, shallow flats, and other structures. Water levels fluctuate seasonally, depending on annual rainfall and other factors. In the fall, water levels on the reservoir are typically low, which affects fishing considerably.