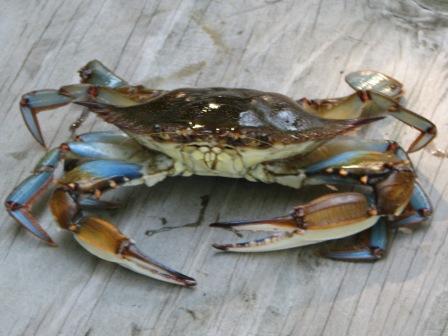 The Atlantic blue crab is caught throughout the Mid Atlantic region from New York to North Carolina. They are especially popular in the Chesapeake Bay and are sometimes called "Maryland blue crabs" or simply "Maryland crabs." Males are called "jimmy crabs." Mature female blue crabs are called "sooks" or "she-crabs."

Blue crabs shed their shells (molt) as they grow. Before shedding, they are called "peeler crabs." Freshly molted crabs are called "soft crabs" or "soft-shelled crabs." After shedding their shells, blue crabs remain "soft-shelled" for only a few hours. Molting occurs 18 to 23 times during the lifetime of the crab.

Blue crabs are considered a delicacy and are usually in high demand. They are usually served steamed, either whole or with the backs removed prior to cooking. After steaming, the crab meat can be picked out and eaten as-is or prepared in a number of ways. In the Mid Atlantic region, the crabcake is a popular way to serve crab meat.

In addition to their table value, blue crabs are valuable as bait for catching tautog (blackfish). In some areas, peeler crabs are highly sought after as fishing bait.